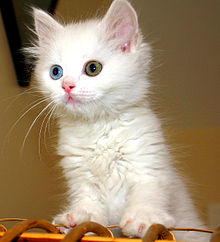 Pets can take a toll on you, especially when they get sick. This is the story of Stanley, the cat, who lives with its “parents” in Philadelphia, PA, back in 2002. It seems that this 5-year-old cat became very ill one evening, throwing up numerous times, as cats sometimes do. In this case, though, the vomiting continued on and on, late into the night, so that by midnight the decision was made to bring Stanley to a pet hospital. There, an x-ray ($500) revealed nothing, and he was sent home. The next day, at Stanley’s regular veterinarian, who noticed the cat’s intestines were beginning to “accordion”, not a term I’m familiar with, but a fairly graphic description that, with some imagination, you can probably visualize.
Afraid that this would lead to perforation and imminent death, surgery was ordered ($1600). What came out was a 2-foot length of dental floss that Stanley had somehow swallowed.
Did he think it was a long version of cat hair? We tried to interview him, but he wasn’t talking–probably too embarrassed. The owners had been dropping their used floss in the bathroom garbage can, which is, if you remember, a good way of keeping it from clogging the sewage pipes if it’s flushed away, as happened in Toronto (see Use # 12- April 17, 2014).
So this misadventure with floss cost this family $2100 (apparently equivalent to $3400 in today’s dollars, or about $5 million dollars in Canadian funds). And pet health insurance isn’t covered by Obamacare, as it is in Canada.
At this very moment, then, the residents of Philadelphia are waiting for their sewage system to collapse, as the habit of flushing floss spreads through that city. (Say “flushing floss” 10 times quickly for more fun).