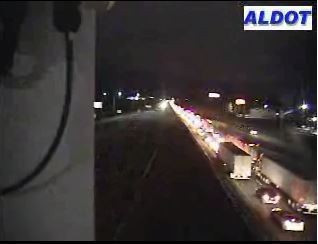 Just as a caveat emptor, the following story took place outside Tuscaloosa, AL, and it’s about a loose tooth. Since a tusk is basically an elephant’s tooth grown extra large, should you be skeptical here: (tusca-loosa, ha!ha!)? There are photos taken from a helicopter of the ensuing mess, seen above, but still, I get that nagging feeling, somehow, like my leg is being pulled. In this case it wasn’t a leg being pulled, it was a loose tooth undergoing this treatment.

You often see stories about dangerous driving on YouTube and other online sites. Scary, especially when you see similar things right on the roads you drive every day. It’s always the other guy’s fault. In this story, there isn’t much guesswork about who was at fault, though, because the only person directly involved ended up with the evidence in his shirt pocket.

A truck driver who must have hated going to the dentist was tooling down the highway outside of Tuscaloosa (See what I mean? You pause a bit at the name.) Seems he had a loose tooth (probably many, and he probably wasn’t a flosser) that was causing him some discomfort, and since he wasn’t doing anything which required his attention, he jiggled it and pulled it out, with both hands, letting go of the steering wheel of his rig to do that. He promptly lost control, the truck jack-knifed, and it ended up in the ditch. The effort to extract his truck caused a traffic jam that lasted from Sunday night until the following morning. How the driver had the presence of mind to slip the tooth into his pocket, I can’t explain. Maybe he thought the tooth fairy would slip him a few dollars for his effort.

So, my advice: see your dentist regularly, brush, floss, and if the unlikely happens and you’re driving along and one of your teeth feels loose, pull over into a safe spot, get out your cell phone, and call your dentist’s office. And don’t tell her or him that you’re from Tusca Loosa.