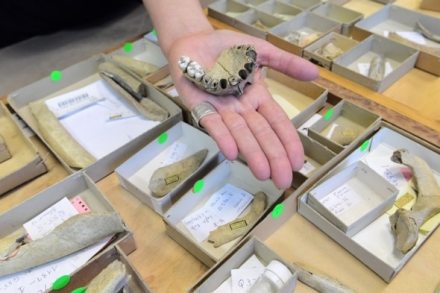 Helene Rougier, anthropologist at California State University Northridge, in the United States, displays some of the 96 bones and three teeth from five Neanderthal individuals which were found in the Belgium Goyet cave. Credit: Emmanuel Dunand Getty Images

Neanderthals were amazing creatures. Much like us, and much not like us at all. And yet, archeologists have recently looked at hardened plaque, which is the same, I think, as what we know as calculus or tartar, the stuff your hygienist spends an hour scraping and vibrating off your teeth at your six-month visit to your dentist. The results are (for me, anyway) amazing.

The Neanderthals of El Sidrón Cave in northern Spain had a pretty hard time. Food was hard to come by, and they had to fight off predators, disease, and long, hard winters. By looking at the stuff stuck between their teeth in five fossil skulls, (some 50,000 years ago or more), it’s been found that they ate mushrooms, moss and pine nuts.

One individual may even have used plants and moulds to treat his diseases. Paleolithic medicine!

Laura Weyrich, a palaeomicrobiologist at the University of Adelaide in Australia co-led the study, and suggests that these findings “really paint a different picture, almost of their personalities, of really who they were.”

Christina Warinner, an archaeological geneticist at the Max Planck Institute for the Science of Human History in Jena, Germany, praises the team’s microbiome reconstructions. The mouths of Neanderthals seem to have been colonized by microbes rare in humans today.

Recent improvements in ancient DNA analysis, have allowed these trace sequences to be identified and have led to a bonanza of research into ancient plaque.

WOOLLY RHINOCEROS
In a 2013 study, a team led by Alan Cooper at the University of Adelaide sequenced preserved plaque to show that major shifts in diet such as the large increase in starch because of settled farming some 10,000 years ago made for large changes in the human oral microbiome.

Weyrich’s team compared plaque DNA from Neanderthals from El Sidrón and from the Spy cave in Belgium. The analysis revealed that whereas Spy denizens seemed to consume woolly rhinoceros and wild sheep, El Sidrón’s foraged for plants, although . Hervé Bocherens, a palaeobiologist at the University of Tübingen, Germany, believes that thee two groups ate meat. Both ate mushrooms.
SWAPPING SPIT

Amazingly, the El Sidrón Neanderthals probably also used plants to self-medicate. DNA from poplar trees (parts of which contain salicyclic acid, historically used in aspirin), and Penicillium mould (the source of penicillin) turned up on one individual’s teeth. Weyrich suspects that they were trying to treat a visible tooth abscess and a stomach infection caused by the bacterium Enterocytozoon bieneusi. Maybe eating mouldy grain could have caused this too, but the idea that these creatures, long thought to be primitive hulking brutes, as self-medicating and familiar with pharmacological approaches to disease is fascinating.

A microbe called Methanobrevibacter oralis is found in the mouths of modern humans, but genetic analysis shows that it was there in ancient humans at the same time as in the mouths of Neanderthals. This suggests the archaebacterium was transmitted between them. Were they kissing, or simply sharing food? Whatever they were doing together, they were together, turning on its head ideas that they were separate and always fighting for dominance.

“If you’re swapping spit between species, there’s kissing going on, or at least food sharing,” says Weyrich, “which would suggest that these interactions were much friendlier and much more intimate than anybody ever possibly imagined.”
So many amazing advances in our study of these ancient beings, who were largely misunderstood in the past, really changes our ideas of whre we came from and how alike we are to what came before us.

The original article in Scientific American by Ewen Callaway can be found at https://www.scientificamerican.com/article/neandertal-tooth-plaque-hints-at-meals-mdash-and-kisses/.